These delicious caramel stroopwafels come in a box that looks like an Amsterdam Canal House from the 1600s. Inside the box are 10 stroopwafels, sealed for freshness in 5 pouches of 2 stroopwafels each. It’s easy to take with you for a snack on the go or put in your lunchbox.

This canal house box is part of a limited series of 4 canal houses. 3Bros takes you on a tour through the canals and Amsterdam’s history.  The classic Dutch Cookie is known as a Stroopwafel.  This Stepped Gable edition box shows one of the most popular designs all throughout the 1600s and several hundred of them are still standing to this day.  Just as some classic styles of architecture withstand the test of time some delicious treats are also timeless… Did you know Stroopwafels have been all the rage since the 1800s? 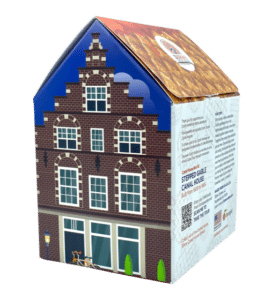 The back view of the 3Bros Stroopwafel Canal House Box

After 1550 and the dip of wooden canal houses, the most popular brick facade design was the stepped gable. The “steps” are made from brick and are usually covered with a natural stone to prevent water from penetrating. The diagonal lines of the roof are obscured by the horizontal lines of the facade.

This style of canal house we particularly popular during the “Golden” 17th century, the cityscape in Holland was dominated by this type of façade. Today, only a few hundred of them remain. Brick was much more expensive to build with than wood, however, this was the economic boom time in Holland and money was not in short supply.

Celebrate Dutch Heritage with us with these collectible classic caramel stroopwafel packaging depicting the beloved Stepped Gabel Style of architecture, filled with a taste of the Netherlands!  There is no reason to stop at just the Classic Stroopwafel, try our other collectible boxes.  We have another classic caramel stroopwafel box that depicts the Bell Gabel Style of Architecture.  If you are craving a bit of chocolate with your stroopwafel, we might interest you in the milk chocolate box that depicts the Neck Gabel Style, a period-era version of the stepped gable canal house.  For our dark chocolate fans, we are proud to announce our dark chocolate stroopwafel box, this box depicts the wooded canal house style of architecture.