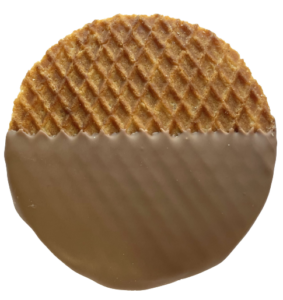 This canal house box is part of a series of 4 canal houses. 3Bros takes you on a tour through the canals and Amsterdam’s history.  We have paired our Belgian milk chocolate-dipped stroopwafel with a limited collectors Neck Gabel Canal House packaging.  We go all the way back to the 17th and 18th centuries.  The only thing richer than our Dutch heritage is the Belgian Milk Chocolate Dipped Stroopwafel.

The neck gable consists of a straight, narrow center “neck” of brick filled out on the sides with sandstone ornamental “wings”. This style was 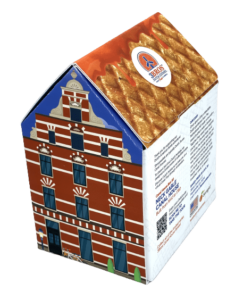 derived from the stepped gable by reducing the number of steps to one or two and adding the ornaments. These ornaments fit in well with the baroque style of Louis XIV. Neck gables were built from 1640-to 1780, particularly in the first half of the 18th century. Architect Philip Vingboons is the inventor of the neck gable; the first real neck gable from 1636, Herengracht 168, was designed by him.

Continue your tour through Dutch History with the Neck Gabel Canal House Edition and our other three historic canal house boxes.  3bros is proud to offer the Dark Chocolate Dipped Stroopwafel paired with the Wooden Gabel Canal house box.  Or you can try or original classic caramel stroopwafel that comes in one of two signature designed boxes of either the Stepped Gabel Canal house or the Bell Gabel Canal House.  Each box brings with it a bit of our Dutch history and a little flavor of the Netherlands.  Need more cookies?  Check out other great offerings by checking out our shop, which is filled to the brim with delicious stroopwafels.